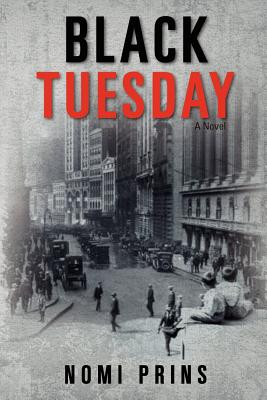 This mesmerizing historical novel captures the swirl of New York City's greed, power, romance and desperation on the cusp of the Great Stock Market Crash of 1929 and Great Depression, eerily mirroring the present. In this vivid tableau of New York with its colorful, diverse cast of characters, Black Tuesday evokes the passion and atmospheric tension of one of our most fascinating historical epochs. From the beleaguered immigrant community of the Lower East Side to the feral pit of Wall Street and the alluring glitter of Park Avenue, Nomi Prins reveals a world of fraud, obsession and economic devastation in a turbulent era that shines a revealing, and disturbing, light on today's world. Black Tuesday is an epic saga that probes the complex intersections of class, family loyalty, desire, and the terrible consequences of deception, avarice, and power. Meet Leila Khan - a vivacious, determined immigrant, struggling to find her purpose in a tumultuous America. Her job at a Wall Street diner introduces her to banker, Roderick Morgan - a captivating yet haunted alcoholic - controlled by his ruthless uncle, bank mogul Jack Morgan. As Leila and Roderick's flirtations deepen into an illicit affair, Leila becomes a marked woman in more ways than one. She uncovers dark, dangerous secrets about Jack's business deals, and Roderick's role in them. But when a body plunges from the top of the Morgan Bank, Leila's world comes crashing down around her. Trying to balance an allegiance to her family, and a fierce need for the truth, Leila delves into a shadowy world of wealth and corruption. In the process she discovers startling facts about both the Wall Street Empire and herself. Her dilemma is timeless and universal, asking the questions - who are we as individuals? As a country? What is it we finally want to become?

After over a decade working at top Wall Street firms, Nomi left a lucrative career in disgust to pen three nonfiction whistle-blower books: It Takes a Pillage, Other People's Money, and Jacked, exposing the shady deals and cozy relationships from Wall Street to Washington. Her thriller, The Trail, was set in the corrupt banking world, and written under a pseudonym. Her prescient work has appeared in The New York Times, The Nation, Daily Beast, The Daily News, Alternet, Fortune, Newsday, Mother Jones, and many other publications. She has been featured in several international documentaries, and is a frequent commentator for PBS, MSNBC, CNBC, C-SPAN, CNN, BBC, Fox, and other stations.
Loading...
or support indie stores by buying on