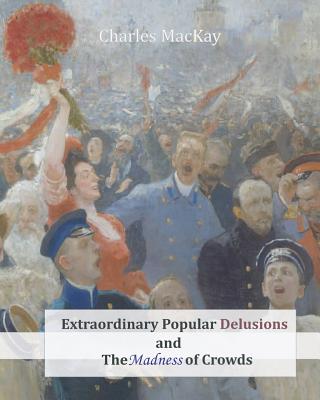 Extraordinary Popular Delusions and The Madness of Crowds

2009 reprint of the 1852 second edition. Two volumes bound into one. Charles Mackay (1814-1889) was a Scottish poet, journalist, and song writer. He was born in Perth, Scotland. His mother died shortly after his birth and his father was by turns a naval officer and a foot soldier. He was educated at the Caledonian Asylum, London, and at Brussels, but spent much of his early life in France. Coming to London in 1834, he engaged in journalism, working for the Morning Chronicle from 1835-1844 and then became Editor of The Glasgow Argus. He moved to the Illustrated London News in 1848 becoming Editor in 1852. He is best known for his classic Memoirs of Extraordinary Popular Delusions and the Madness of Crowd, reprinted herein. Mackay covers many types of delusions, among them financial manias like the South Sea Company bubble of 1711-1720, the Mississippi Company bubble of 1719-1720, and the Dutch tulip mania of the early seventeenth century. According to Mackay, during this bubble, speculators from all walks of life bought and sold tulip bulbs and even futures contracts on them. Allegedly some tulip bulb varieties briefly became the most expensive objects in the world during 1637. Mackay's accounts are enlivened by colorful, comedic anecdotes, such as the Parisian hunchback who supposedly profited by renting out his hump as a writing desk during the height of the mania surrounding the Mississippi Company. Financier Bernard Baruch credited the lessons he learned from Mackay with his decision to sell all his stock ahead of the financial crash of 1929.Other chapters are devoted to Alchemists, scientists and pseudo scientists who attempted to turn base metals into gold. Mackay notes that many of these practitioners were themselves deluded, convinced that these feats could be performed if they discovered the correct old recipe or stumbled upon the right combination of ingredients.There are also extensive treatments on the Crusades, Witch Mania and Trials and other forms of mass delusion.