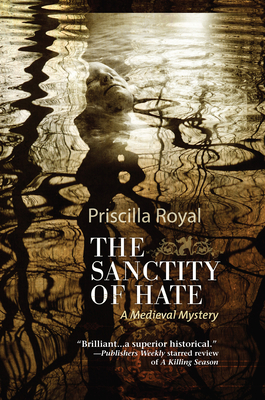 The Sanctity of Hate (Medieval Mysteries)

The summer of 1276 at Tyndal Priory is passing peacefully until a villager's corpse is found floating in the millpond. The murder victim, a newcomer, was greatly disliked in Tyndal. Yet no villager wants to see one of their own hanged for the deed. Fingers quickly point to a trio of Jewish refugees—husband, mother-in-law, and very pregnant wife—forced to take shelter while relocating under the provisions of King Edward's Statute of the Jewry. Riots loom; threats against the Jews mount. Eleanor and Ralf have little time to gather evidence before popular opinion rules the murder solved. But when the prioress' maid Gytha joins the suspect list, the inquiry takes an even more troubling turn. Murder investigations are always grim, but this one grows as ominous as a North Sea storm....


Praise For The Sanctity of Hate (Medieval Mysteries)…

"...enthralling medieval mysteries... The vividly drawn characters in The Sanctity of Hate enlighten us on many details of monastic life." — Marilyn Stasio, New York Times

"Period details fit unobtrusively with the action, and the pacing makes this a one- or two-sitting read at most." — Publishers Weekly STARRED Review

"Prioress Eleanor finds summer is less than idyllic when a drowning death turns out to be murder, in her ninth investigation." — Library Journal

"Historical-mystery fans will find much to like here. The novel is well researched, with an intriguing plot and a timely message about religious tolerance." — Barbara Bibel, Booklist

"Royal's ninth...includes some fascinating historical information that may come as a surprise to many readers." — Kirkus Reviews

Priscilla Royal grew up in British Columbia and earned a B.A. in World Literature at San Francisco State University, where she discovered the beauty of medieval literature. She is a theater fan as well as a reader of history, mystery, and fiction of lesser violence. When not hiding in the thirteenth century, she lives in Northern California and is a member of California Writers Club, Mystery Writers of America, and Sisters in Crime.
Loading...
or
Not Currently Available for Direct Purchase