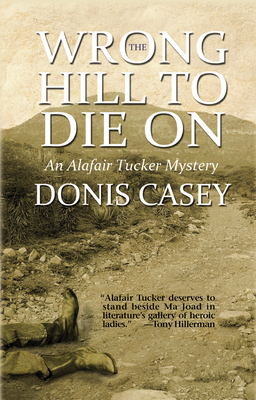 The Wrong Hill to Die on (Alafair Tucker Mysteries #6)

1916: Alafair Tucker had not wanted to come to Arizona, but because of her young daughter Blanche's lung ailment, she and her husband Shaw bundled Blanche onto the train and made the nightmare trip from Oklahoma to Alafair's sister in Tempe, Arizona, hoping the dry desert air would help their daughter.

As soon as they arrive, Blanche begins to improve, and Alafair is overjoyed to see her witty, beautiful sister Elizabeth again. For added excitement, a Hollywood motion picture company is shooting their movie right in Tempe.

But Alafair and Shaw soon discover that all is not well. Elizabeth's marriage is in tatters; tensions are high between the Anglo and Latino communities following Pancho Villa's murderous raid on Columbus, New Mexico; and Alafair suspects her sister is involved in an illegal operation to smuggle war refugees out of Mexico and into the U.S.

And now here there's Bernie Arruda, dead on his back in a ditch. The night before he had been singing Mexican love songs at the party in Elizabeth's backyard. Can Alafair connect all the pieces and discover a murderer before it is too late?

Donis Casey is the author of six Alafair Tucker Mysteries. Her series, set in Oklahoma during the booming 1910s and featuring the sleuthing mother of ten children, has twice won the Arizona Book Award and has been a finalist for the Willa Award and the Oklahoma Book Award. Her first novel, The Old Buzzard Had It Coming, was named an Oklahoma Centennial Book. Donis was born and raised in Tulsa, Oklahoma, and now lives with her husband, poet Donald Koozer, in Tempe, AZReaders can enjoy the first chapter of each book on her web site at www.doniscasey.com. Casey blogs each Saturday about mystery writing at www.typem4murder.blogspot.com, and about food and mysteries at www.fatalfoodies.blogspot.com.
Loading...
or
Not Currently Available for Direct Purchase