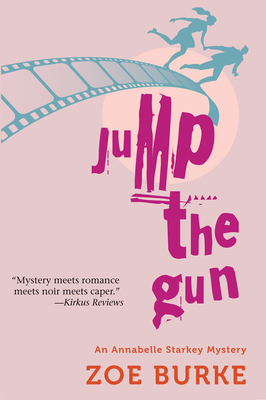 Annabelle Starkey is a shrewd, sweet, and sexy Stephanie Plum without the Jersey girl attitude. She's a one-man kind of girl who loves hats and shoes.

Annabelle also loves movies. But her own life doesn't match her favorite silver-screen scenarios. Then, one day she meets charming, slightly mysterious, and definitely magnetic Mickey Paxton and decides it's time to live one of those Cary Grant films. They fly to Las Vegas for a holiday and a test flight for romance.

The script takes a surprising turn when they arrive in Sin City. Suddenly Annabelle and Mickey are on the run--from what? And why? Did Mickey lead Annabelle into this mess? Then a murder in Annabelle's San Francisco apartment sends the couple winging west to that city where, once again, criminals and cops pursue them.

In two frenetic days of fast driving, fast talking, and fast thinking, Annabelle learns to trust her instincts. No matter what the danger, Annabelle's fresh and funny voice is her best weapon.

Zoe Burke is the author of two children s books, Charley Harper s What s in the Woods: A Nature Discovery Book (Pomegranate, 2013) and Lightning Bug Thunder (Firefly, 1998). This is her first mystery novel. In her day job, she is the vice president and publisher of Pomegranate Communications, an art book publishing company. She enjoyed a brief singer/songwriter career as Katie Burke in the 1990s. She lives in Portland, Oregon, with her husband."
or
Buy Here
(This book is on backorder)
Copyright © 2020 American Booksellers Association