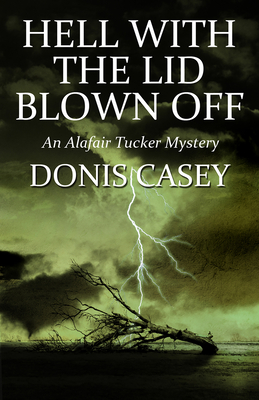 Hell with the Lid Blown Off (Alafair Tucker Mysteries #7)

In the summer of 1916, a big twister cuts a swath of destruction through Boynton, Oklahoma. Alafair Tucker's family and neighbors are not spared the ruin and grief spread by the storm.

But no one will mourn for dead Jubal Beldon, who'd made it his business to know everyone's ugly secrets. It never mattered if Jubal's insinuations were true or not since in a small town like Boynton, rumor could be as ruinous as fact. Then Mr. Lee, the undertaker, discovers that Jubal was already dead when the tornado swept his body away. Had he died in an accident or had he been murdered by someone whose secret he had threatened to expose? Dozens of people would have been happy to do the deed, some of them members of Jubal's own family. As Sheriff Scott Tucker and his deputy Trenton Calder look into Jubal's demise, it begins to look like the prime suspect may be someone very dear to the widow Beckie MacKenzie, mentor of Alafair's daughter Ruth. Ruth fears that the secrets exposed by the investigation are going to cause more damage to Beckie's life than the tornado. Alafair, coping with injuries to her own, still has time for suspicions about how Jubal Beldon came to die. What if the truth of it hits very close to home?

Donis Casey is the author of the Alafair Tucker Mysteries, including The Old Buzzard Had It Coming, Hornswoggled, The Drop Edge of Yonder, The Sky Took Him, Crying Blood, and The Wrong Hill to Die On. Donis has twice won the Arizona Book Award and has been a finalist for the Willa Award and the Oklahoma Book Award. Her first novel, The Old Buzzard Had It Coming, was named an Oklahoma Centennial Book. She lives in Tempe, Arizona. Readers can enjoy the first chapter of each book on her web site at www.doniscasey.com
or support indie stores by buying on