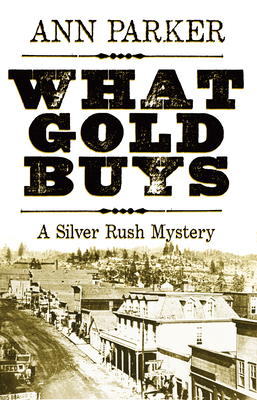 "Parker wraps up the mystery deftly but leaves Inez's future sufficiently unresolved so that readers will eagerly await the next installment."—Publishers Weekly STARRED review

Autumn, 1880, in the Rocky Mountains brings frost, snow, and the return of Inez Stannert to Leadville, Colorado, where she is one of three partners in the Silver Queen Saloon. Her undisputed reign is going to be challenged by her roving husband, Mark, who returns with her. The third owner, African-American Abe Jackson, is definitely worried about harnessing this volatile pair to the business, especially as Mark seems bent on wooing back his wife.

The boomtown that greets the Stannerts is, as ever, populated by people in quest of fortunes in precious metals. Others, hungry for spiritual relief, seek to pierce the veil between life and death with the help of fortune-tellers, mediums, and occultists. Meanwhile, deep in the twisted byways of Leadville's Stillborn Alley, soothsayer Drina Gizzi works while awaiting the promised arrival of her benefactor, a Mr. Brown.

When Drina is found murdered, strangled with a set of silver and gold corset laces, no one seems to care except the three who find her body: Inez, her lover Reverend Justice Sands, and Drina's young daughter, Antonia, who has been struggling to support her mother by disguising herself as a newsboy called Tony. The mystery surrounding Drina's death deepens when her body vanishes without a trace.

As Inez and Antonia band together to seek out Drina's killer, they unearth evidence that resurrection men are supplying bodies dug from the cemetery to "anatomical dissection classes." Additionally, long-held grievances and white-hot revenge surface, complicated by an unruly group of young British remittance men. And by the missing, mysterious Mr. Brown.

Meanwhile Mark Stannert, true to his word that he only "plays to win," contrives to drive Inez and Sands apart, gambling that he can convince her to abandon her plans for divorce. But what can gold buy? A new life? Freedom from the past? Truth and justice for those murdered and unmourned? Or a final passage for Inez and Antonia into an unmarked grave and the world of the dead?

Praise for the Silver Rush Mysteries:

"One of the most authentic and evocative historical series around. Long live Inez!"—RHYS BOWEN, New York Times bestselling author for What Gold Buys

"At last a new Silver Rush mystery from Ann Parker! And this one lives up to everything I've come to expect from one of the most authentic and evocative historical series around. Long live Inez!" — Rhys Bowen, New York Times bestselling author

"Parker wraps up the mystery deftly but leaves Inez’s future sufficiently unresolved so that readers will eagerly await the next installment." — Publishers Weekly STARRED Review

"Once again, the fifth from Parker is much better history than mystery, drawing the reader into the stunning beauty and harsh realities of life in 1880s Colorado." — Kirkus Reviews

"Parker expertly captures the roughness of a mining town where saloon owners and brothel madams seek to separate prospectors from their money." — Historical Novel Society

Ann Parker is the author of the award-winning Silver Rush historical mystery series set in 1880s, featuring saloon owner Inez Stannert. A science writer by day, Ann lives in the San Francisco Bay Area and is a member of Mystery Writers of America and Women Writing the West.