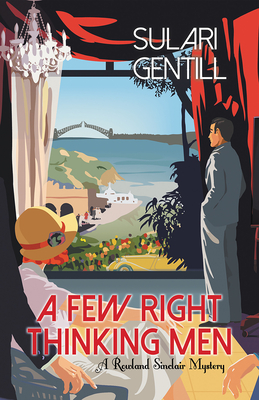 Meet Rowland Sinclair, gentleman and artist living in 1931 Sydney. Friend of the Left, son of the Right, he paints in a superbly tailored, three-piece suit and houses friends who include a poet, a painter, and a feminist sculptress whom he has painted nude and hung it in the drawing room. Is he perhaps in love with Edna? If so, she isn't having any.

Sinclair's fortune and his indifference to politics shelter him from the mounting tensions of the Great Depression roiling Australia and taking it near the brink of revolution.

One day in December 1931 comes terrible news: Uncle Rowly has been murdered in his home by unknown assailants. The murder prompts Roland to infiltrate the echelons of the old and new guard. Among them are a few right thinking men, a cadre of conservatives who became convinced of a Communist takeover and have formed a movement to combat it. In time, Rowland's investigation exposes an extraordinary conspiracy with direct personal consequences.

After setting out to study astrophysics, graduating in law and then abandoning her legal career to write books, Sulari now grows French black truffles on her farm in the foothills of the Snowy Mountains of NSW. Sulari is author of The Rowland Sinclair Mystery series, historical crime fiction novels (eight in total) set in the 1930s. Sulari's A Decline in Prophets (the second book in the series) was the winner of the Davitt Award for Best Adult Crime Fiction 2012. She was also shortlisted for Best First Book (A Few Right Thinking Men) for the Commonwealth Writers' Prize 2011. Paving the New Road was shortlisted for another Davitt in 2013.
Loading...
or support indie stores by buying on