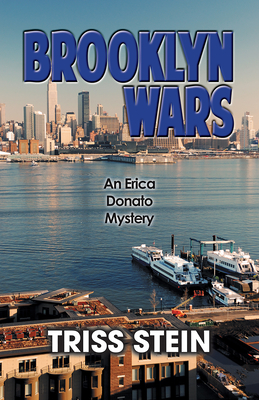 "Stein's sure hand weaves history and mystery together for a colorful tale of love, loss, greed, and murder." —Publishers Weekly

From the earliest days of the Republic until the administration of LBJ, the Brooklyn Navy Yard was, proudly, both an arsenal of democracy, in FDR's words, and the creator of 70,000 local jobs. In time it became best known as the scary place New Yorkers had to locate to rescue their impounded cars. And then it came back to life, but not without a war.

A public meeting becomes a battleground over plans to redevelop the once-proud Brooklyn Navy Yard. Local residents clamor for their own agenda in redeveloping 300 acres overlooking a sparkling downtown Manhattan, while business and real estate experts argue and city officials cower. Erica Donato, still writing her PhD dissertation about changes in city neighborhoods, witnesses the shocking murder of a power-broker that night on the Yard's condemned Admirals' Row.

Erica uncovers the dead man's complicated history with the Yard, with his road to wealth and a high-flyer lifestyle, and with his wives and mistresses. When her daughter, Chris, visits her father's relatives for a family history project, Erica goes along, and learns that the Donato clan was involved in the Navy Yard's glory days and its slow, politics-ridden death. The story of Aunt Philomena, tall and blond, one of the proud Brooklyn girls who built ships in the Yard during World War II, captivates her. After the U.S. victory these women were told to give their jobs back to the men coming home. Philomena, so strong, so happy, mysteriously faded away and died young.

Under pressure to drop her chapter on the Naval Yard and finish her PhD dissertation on a final deadline, as well as from the police to step aside for safety, Erica once again discovers "what's past is prologue" to murder...and to her life.

"Triss Stein’s Erica Donato series contains my favorite brew of mystery ingredients: a strong sense of place, history and character. Brooklyn, the symbol of all things both modern and retro, again anchors this fourth installment. As historian Erica investigates another murder, the former heyday of the Brooklyn Navy Yard will be revisited, proving that the past never really dies." — Naomi Hirahara, Edgar Award-winning author of Hiroshima Boy

"Stein’s sure hand weaves history and mystery together for a colorful tale of love, loss, greed, and murder." — Publishers Weekly

Triss Stein is a small-town girl who has spent most of her adult life living and working in New York City. This gives her the useful double vision of a stranger and a resident which she uses to write mysteries about Brooklyn, her ever-fascinating, ever-changing, ever-challenging adopted home. Brooklyn Legacies is the fifth Erica Donato mystery, following Brooklyn Bones, Brooklyn Graves, Brooklyn Secrets, and Brooklyn Wars.