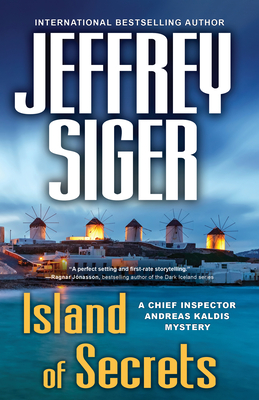 Next book in the Chief Inspector Andreas Kaldis Mystery Series

From international bestselling author Jeffrey Siger comes another heart-stopping story of corruption and intrigue. The idyllic Greek island of Mykonos may be heaven on earth, but it's also the perfect cover for an international organized crime ring… and Chief Inspector Kaldis soon finds himself taking it on.

The case begins for Athens' Chief Inspector Andreas Kaldis with a literal bang when a corrupt former police colonel who runs a protection racket on Mykonos is gunned down. Suddenly, Kaldis is face-to-face with Greece's top crime bosses on Mykonos, an island whose natural beauty and reputation as an international playground belies the corruption lurking just beneath the surface.

While Kaldis and his Special Crimes unit wrestle for answers, his wife, Lila, meets an American expat named Toni, a finder of stolen goods and a piano player in a gender-bending bar who has a zest for life and no apparent regard for rules. As Lila and Toni bond over a common desire to mentor young island girls trapped in an exploitative and patriarchal culture, they soon find that their efforts intersect with Kaldis' investigation in ways that prove to be dangerous for all involved…

Rife with intrigue and thrilling action, once again Jeffrey Siger proves himself a master of capturing Greece in fiction. In this newest addition to the acclaimed international mystery series, Chief Inspector Kaldis is forced to dive into an investigation that just might swallow him whole. Because when corruption lies deep beneath the surface, how can the truth come to light?

The perfect blend of action and culture, this series is:

(Previously published as The Mykonos Mob)