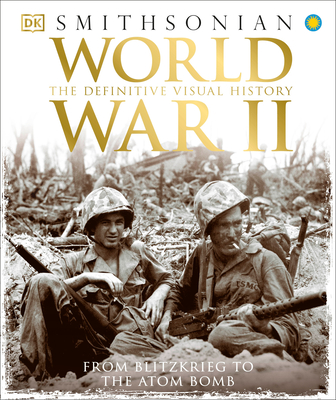 The Definitive Visual History from Blitzkrieg to the Atom Bomb

World War II: The Definitive Visual History is a comprehensive, authoritative, yet accessible guide to the people, politics, events, and lasting effects of World War II.

Perhaps the most complex, frightening, and destructive event in global history, the Second World War saw the heights of human courage and the depth of human degradation. World War II presents a complete overview of the war, including the rise of Hitler and the Nazi party, fascism, Pearl Harbor, Hiroshima, and the D-Day landings. This book also looks at the enduring effects of World War II during succeeding decades.

Expanded with an all-new guide to battlefield and memorial sites and repackaged to honor the 70th anniversary of the end of the war, World War II: The Definitive Visual History covers key military figures, pivotal battles, political profiles, and strategies, as well as features on everyday life on the Home Front as ordinary citizens did their best to aid the war effort. Gallery spreads feature collections of uniforms, weapons, and other equipment. Maps, timelines, and side panels offer an inviting variety of entry point to the huge wealth of information.


Praise For World War II: The Definitive Visual History from Blitzkrieg to the Atom Bomb…

"[A] striking coffee-table book…The first-rate illustrations, maps, and time lines make for a good introduction for all general readers embarking on study of this war." — Library Journal

"[A] worthy book for the shelves of the serious student of war, or for the coffee table of any reader who seeks a comprehensive history of the world's greatest conflict." — BookPage

"This ultimate World War II guide describes each momentous episode of the conflict, while simultaneously giving an overarching view of the war intended to end all wars." — History Channel Magazine

DK was founded in London in 1974 and is now the world's leading illustrated reference publisher and part of Penguin Random House, formed on July 1, 2013. DK publishes highly visual, photographic nonfiction for adults and children. DK produces content for consumers in over 87 countries and in 62 languages, with offices in Delhi, London, Melbourne, Munich, New York, and Toronto. DK's aim is to inform, enrich, and entertain readers of all ages, and everything DK publishes, whether print or digital, embodies the unique DK design approach. DK brings unrivalled clarity to a wide range of topics with a unique combination of words and pictures, put together to spectacular effect. We have a reputation for innovation in design for both print and digital products.   Our adult range spans travel, including the award-winning DK Eyewitness Travel Guides, history, science, nature, sport, gardening, cookery, and parenting. DK’s extensive children’s list showcases a fantastic store of information for children, toddlers, and babies. DK covers everything from animals and the human body, to homework help and craft activities, together with an impressive list of licensing titles, including the bestselling LEGO® books. DK acts as the parent company for Alpha Books, publisher of the Idiot's Guides series and Prima Games, video gaming publishers, as well as the award-winning travel publisher, Rough Guides.
or support indie stores by buying on
(This book is on backorder)