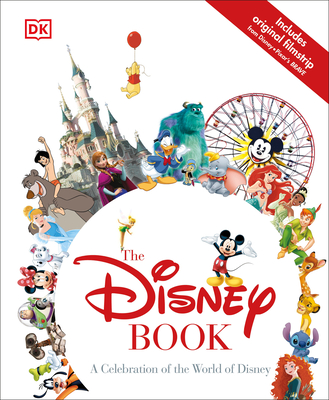 A Celebration of the World of Disney

Celebrate movie history and the world of Disney, from the animations and live action movies to the magical Disney parks and attractions, with The Disney Book.

Go behind-the-scenes of Disney's best-loved animated movies and find out how they were made, follow Disney's entire history using the timeline, and marvel at beautiful concept art and story sketches.

Perfect for Disney fans who want to know everything about the magical Disney world, The Disney Book delves into their incredible archives and lets readers explore classic Disney animated and live action movies, wonder at fascinating Disney collectibles and even see original story sketches from Disney films.


Praise For The Disney Book: A Celebration of the World of Disney…

Jim Fanning is an internationally published writer, historian, editor, lecturer and researcher specializing in Disney. In a career dedicated to celebrating and exploring the work and life of Walt Disney and his colleagues, as well as those who carry on their creative legacy, Jim has authored books, magazine articles, online pieces, TV documentaries, comics and more. Covering everything from Mickey Mouse to the Frozen phenomenon, Jim has written on all aspects of the Disney oeuvre, from animation and theme parks to live-action films and television to publications and merchandise. A regular contributor to Disney twenty-three Magazine, the magazine of D23, the official Disney Fan Club, and the D23 website, as well as Disney Fan, published in Japan, he has written officially commissioned projects for many departments of The Walt Disney Company. In addition to editing and serving as head writer and image researcher for Sketches, the Official Magazine of the Walt Disney Collectors Society for much of its almost two decade run, Jim has been editor, head writer and image researcher for two popular weekly periodicals published in Japan, Disney Dream File and Disney Parade. Jim also has contributed writing and research to the Walt Disney Family Museum in San Francisco.

Discover more about the works and career of Jim Fanning at jim-fanning.com.
Loading...
or support indie stores by buying on