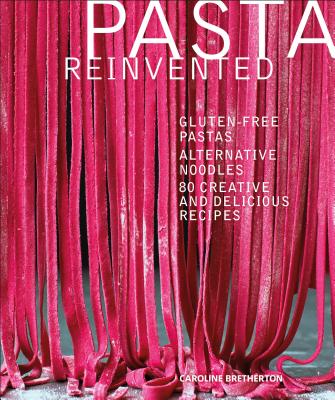 "If you or anyone you know loves pasta, whether making or simply cooking with it, this book is a must-have."

"A great asset for anyone gluten intolerant, as well as adventurous cooks. Great recipes!"

Discover a world beyond traditional wheat-based pasta and enjoy nutrient-packed alternative pastas made from a variety of grains, beans, nuts, and spiralized produce.

Arm yourself with 80 new recipes that are simple enough for any home cook, but elegant and gourmet enough for the most adventurous tastebuds. Prepare dishes that will highlight - not hide! - the flavors of your chickpea pasta, almond flour pappardelle, or shirataki noodles. Perfectly balanced dishes will have you coming back to this cookbook again and again.

With Pasta Reinvented, you'll learn how to make and shape pasta from scratch with alternative flours, or how to use store-bought pastas to the greatest advantage.

Protein- and fiber-packed recipes - many gluten free and vegetarian - offer you a new generation of dishes to go with the latest evolution of pasta and noodles.

British born Caroline Bretherton has spent the last 20 years following her passion for food within the food business in many different capacities. After running a highly successful London-based catering company for a number of years, she expanded the company to include a café in the heart of London's Notting Hill - an all day eatery serving fresh, seasonal food.

Her career soon grew to include the UK television market, with guest chef appearances on the Food Network as well as other television networks, followed by a co-presenting role on the Taste Network's flagship program, Real Food.

She has published the hugely successful Step-by-Step Baking (2011), The Pie Book (2013) and Family Kitchen Cookbook (2013), as well as The American Cookbook (2014), Desserts (2015), Super-Clean Super Foods (2017), and Sprouted (2017). She has also contributed recipes to publications such as the Daily Telegraph and worked with well-known nutritionist Jane Clarke to contribute recipes to her book Complete Family Nutrition (2014).

All her books have been published internationally by Dorling Kindersley, and translated into several languages.
Loading...
or
Not Currently Available for Direct Purchase