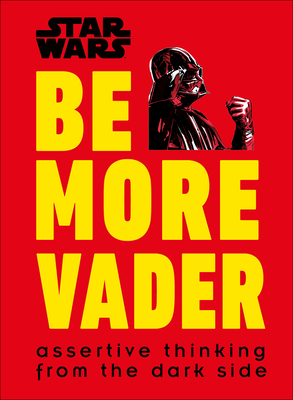 Assertive Thinking from the Dark Side

Move from apprentice to master with assertiveness advice from the Star Wars™ galaxy's most powerful leaders, including Darth Vader, Palpatine, and Supreme Leader Snoke.

Negotiating the workplace can be an impossible task, especially if that workplace is a towering, all-powerful force intent on taking over the galaxy. Whether your day-to-day work involves developing plans to build the Death Star, building a rebellion, or simply trying to make the printer work, the leaders of the Star Wars universe offer essential guidance on how to assertively deal with common professional pitfalls.

Find out how to get a promotion, beat the competition, manage difficult employees, and move from intern to CEO with top tips from Star Wars: Be More Vader and the most powerful villains in the Star Wars movies.

The perfect gift for colleagues and friends alike, Star Wars: Be More Vader is a tongue-in-cheek guide on how to advance your career, featuring favourite moments from the Star Wars series alongside hilarious advice and iconic, inspirational Star Wars quotes.

BBC Culture deputy editor Christian Blauvelt, based in New York, has been an entertainment and culture journalist for a decade, specializing in coverage of film, television, pop and classical music, and the visual arts. He regularly appears on CBS New York to give previews of upcoming films and awards season analysis, has been a frequent contributor to BBC World News’ Talking Movies, recently introduced a night of films on Turner Classic Movies based on BBC Culture's 100 Greatest Comedies list he compiled, and has given many talks at South by Southwest and San Diego Comic-Con, as well as regularly serving as a host and moderator for the SAG-AFTRA Foundation and BAFTA.

In December 2016 Blauvelt was named to Cablefax Magazine’s Overachievers Under 30 list for rising talent in media, and his site BBC Culture won the Webby’s People’s Voice award in 2017 for “Best Cultural Website” and a second Webby in 2018 for “Best Arts & Culture Social Media.” He is the author of Star Wars™ Made Easy, a primer to George Lucas’ saga for those who’ve never seen the films, but want to know what all the fuss is about. He previously worked for Entertainment Weekly magazine.
Loading...
or support indie stores by buying on