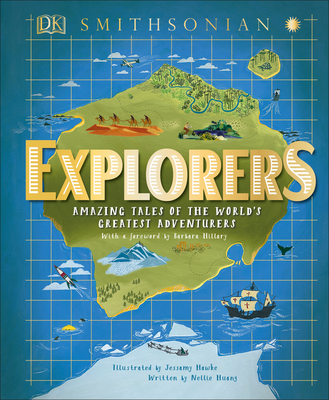 From the first people to leave Africa to the first to leave the planet, the urge to explore the unknown has driven human progress. DK's Explorers tells the story of humanity's explorations, taking the reader into the lives of some of the most intrepid people ever known. Focusing on 50 of the world's greatest explorers, with shorter entries on 60 of their helpers and companions, the book is filled with first-person accounts in the explorers' own words, rare maps, specially commissioned photographs, and artworks re-create history's greatest expeditions. From trade and the search for lands to colonize, to scientific curiosity and missionary zeal, Explorers introduces history's most famous trail blazers-people whose courage opened frontiers, turned voids into maps, forged nations, connected cultures, and added to humankind's knowledge of the world by leaps and bounds.

DK was founded in London in 1974 and is now the world's leading illustrated reference publisher and part of Penguin Random House, formed on July 1, 2013. DK publishes highly visual, photographic nonfiction for adults and children. DK produces content for consumers in over 87 countries and in 62 languages, with offices in Delhi, London, Melbourne, Munich, New York, and Toronto. DK's aim is to inform, enrich, and entertain readers of all ages, and everything DK publishes, whether print or digital, embodies the unique DK design approach. DK brings unrivalled clarity to a wide range of topics with a unique combination of words and pictures, put together to spectacular effect. We have a reputation for innovation in design for both print and digital products.   Our adult range spans travel, including the award-winning DK Eyewitness Travel Guides, history, science, nature, sport, gardening, cookery, and parenting. DK’s extensive children’s list showcases a fantastic store of information for children, toddlers, and babies. DK covers everything from animals and the human body, to homework help and craft activities, together with an impressive list of licensing titles, including the bestselling LEGO® books. DK acts as the parent company for Alpha Books, publisher of the Idiot's Guides series and Prima Games, video gaming publishers, as well as the award-winning travel publisher, Rough Guides.
or support indie stores by buying on
Copyright © 2020 American Booksellers Association