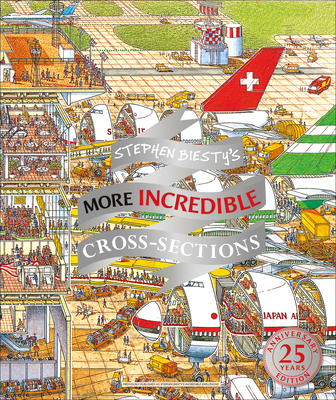 This illustrated book for children shows you how things work. Look inside the human body, explore the magic of Venice, and take a tour around a movie studio - and much more!

Part of a unique series, More Incredible Cross-sections is Stephen Biesty at the top of his game. In this updated edition with a refreshed, contemporary style, he gives readers an exploded view of 12 objects, places, landmarks, and modes of transport. But look closer! In every picture is an alien who has lost his way: can you find him?

As you pore over Stephen Biesty's superbly detailed pages, you will also discover loads of awesome facts. Did you know that steam engines were notoriously difficult to stop, leading to frequent accidents? Or that people at an Antarctic research base rely on supplies from an aircraft's parachute drops during winter?

From windmills to cities, airports to space stations, More Incredible Cross-sections is for curious minds of any age interested in finding out how our amazing world works.

Richard Platt has published more than 100 books, 32 of which were for DK. He has won several prizes, including a Blue Peter award. Richard also writes TV scripts and museum interpretation, and he has appeared on TV and radio.

Stephen Biesty made his name in the 1990s for his bestselling Incredible Cross-Section series published by DK, which has topped sales of more than 3.5 million globally and has been printed in 16 languages. He has won many prizes, including the New York Times Best Illustrated Book Award in 1993. Stephen has also worked on several digital media projects, including an animated film for an exhibition at Tower Bridge in 2009.
or
Buy Here
Copyright © 2020 American Booksellers Association