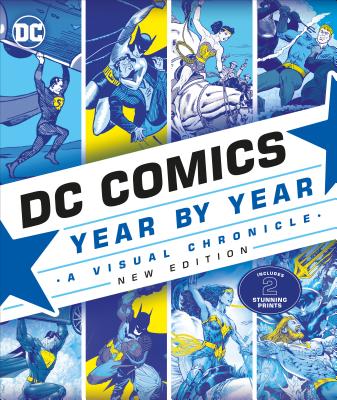 In 1938, Superman led the charge. The world's first Super Hero was soon followed by his Justice League teammates Batman, Wonder Woman, the Flash, Aquaman, Shazam! and Green Lantern. These heroes, and their Super-Villainous foes such as Lex Luthor and The Joker, became the foundation of DC Comics. You can trace these characters' evolution, and learn about the company and creators who made them the enduring pop culture icons they are today in DC Comics Year By Year: A Visual Chronicle - the most comprehensive, chronological history of DC Comics ever published.

Fully updated, this best-selling, visually stunning book details the debuts and careers of every major hero and villain in the DC Universe. It also chronicles the company's fascinating 85-year history, highlighting its publishing milestones and expansion into movies and television, alongside the real-world events that shaped the times.

DC Comics Year By Year: A Visual Chronicle is guaranteed to keep fans enthralled for hours on end.