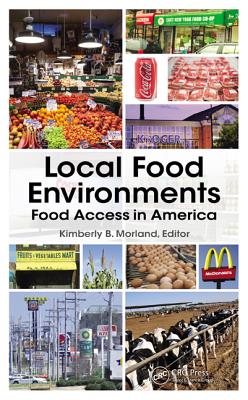 Local Food Environments: Food Access in America provides information on the complex nature of food delivery systems as well as the historical and political trends that have shaped them over time. The book presents the empirical evidence demonstrating disparities in access to healthy affordable foods across the United States and how these disparities may explain food consumption patterns for some Americans as well as potential risks for diet-related illness.

The book describes the current body of research surrounding these associations and presents the methodological issues pertinent to this area of public health. Evidence from these studies is placed in context of current and past American food policies that have supported the existing food retail market including the production and retailing of foods and ways in which the consolidation of the food system has affected Americans. Research conducted regarding local food environments in Canada has also been included as a point of comparison.

Although this book focuses on US local food environments, similar issues regarding access to food are concurrently taking place outside of the US. In all chapters, readers are encouraged to critically consider the current research methods as well as recent programs and policies that aim to address local food environments.

Kimberly B. Morland is an associate professor at Mount Sinai School of Medicine in New York City. She obtained her PhD in epidemiology from the University of North Carolina. Dr. Morland has developed new epidemiologic methods for geographically based data collection and analysis to investigate associations between neighborhood environments and residents' behaviors that have been replicated by investigators in areas across the United States and other countries. They have also been used by community-based organizations to support local changes to commercial environments. Dr. Morland has served on a number of national and local review panels, worked with community-based organizations, and implemented one of the first interventions to address food access by developing a community-owned and community-operated food store in Brooklyn. Her research focuses on the impact of local environments on health.
or
Not Currently Available for Direct Purchase