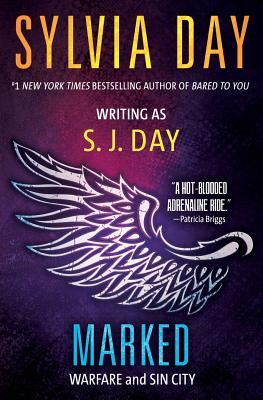 EVE OF WARFARE
Lycans, vampires, and cherubs... oh my.

All Evangeline Hollis wants is to stay out of trouble long enough to lose the Mark of Cain, which drafted her into hunting demons for God. A former agnostic, she's still recovering from being the latest point of contention between the two men in her life--Cain and Abel. Now she's working for a cherub who thinks putting her undercover as a housewife is the best way to ferret out a rogue vampire hiding in an idyllic Orange County, California residential community.

Eve knows when she's being used as a pawn in the celestial political game. Now, she just has to figure out who's the greater threat: the vampire she's hunting, the cherub yanking her chain, or the two brothers vying to play the role of her spouse--'til death do them part. Which in her line of work, could happen any minute...

EVE OF SIN CITY
Sin City--Las Vegas--is home to humans and Infernals of all sorts: the good, the bad, and the ugly. If you ask Evangeline Hollis, "good" is in short supply, "ugly" might be amusing, but "bad" is most definitely her business. Eve is a Mark, a heavenly bounty hunter, and Las Vegas is her territory.

Sylvia Day is the #1 New York Times and #1 international bestselling author of more than a dozen award-winning novels sold in thirty-nine countries. A reader favorite across several genres, there are millions of copies of her books in print worldwide. She has been nominated for the Goodreads Choice Award for Best Author and her work has been honored as Amazon's Best of the Year in Romance. She has won the RT Book Reviews Reviewers' Choice Award and been nominated for Romance Writers of America's prestigious RITA award twice.
Loading...
or
Not Currently Available for Direct Purchase