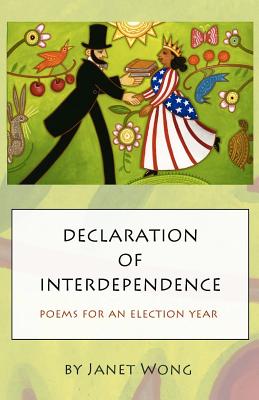 Poems for an Election Year

Acclaimed poet Janet Wong is known for her eclectic range of topics, and this collection is no exception. Twenty poems explore liberty, kids' rights, free speech, political debates, unusual presidential candidates, the two-party system, voting, the electoral college, and more. "A Voter's Journal" appears at the end of the book, featuring a dozen writing prompts and a discussion guide with space for journal entries. These poems are simple enough for a second grader to understand, yet complex enough to start interesting discussions among people of all ages. An author's note urges readers to "look around, read the news, talk about what's going on in the world, vote (or encourage people to vote)-and take the initiative to contribute, in your own best way." This is a perfect gift for a new voter or for a classroom teacher to use during the election season. Readers of all ages are encouraged to post their thoughts about voting and politics at TheDeclarationofInterdependenceBlog.blogspot.com. Here is the poem "Liberty": Liberty I pledge acceptance of the views, so different, that make us America To listen, to look, to think, and to learn One people sharing the earth responsible for liberty and justice for all.

Janet Wong was born and raised in California, the child of Korean and Chinese immigrants. She obtained a B.A. in History from UCLA and a J.D. from Yale Law School. Janet worked for a few years as a lawyer, then decided to write full-time for children and teens. Her work has a wide range, including picture books, chapter books, poetry collections, and books about writing. Janet's poems have been featured in some unusual venues, such as on 5,000 subway and bus posters as part of New York City's "Poetry in Motion" program. In addition, she has been featured on The Oprah Winfrey Show and CNN, and has read her books at the White House. www.janetwong.com TheDeclarationOfInterdependenceBlog.blogspot.com
Loading...
or support indie stores by buying on