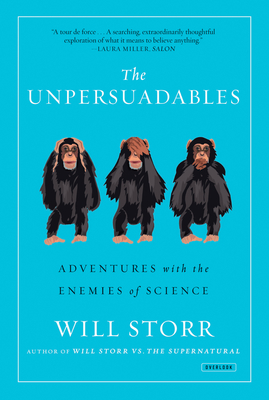 Adventures with the Enemies of Science

Why, that is, did the obviously intelligent man beside him sincerely believe in Adam and Eve, the Garden of Eden and a six-thousand-year-old Earth, in spite of the evidence against them? It was the start of a journey that would lead Storr all over the world—from Texas to Warsaw to the Outer Hebrides—meeting an extraordinary cast of modern heretics whom he tries his best to understand. Storr tours Holocaust sites with famed denier David Irving and a band of neo-Nazis, experiences his own murder during “past life regression” hypnosis, discusses the looming One World Government an iconic climate skeptic, and investigates the tragic life and death of a woman who believed her parents were high priests in a baby-eating cult. Using a unique mix of highly personal memoir, investigative journalism, and the latest research from neuroscience and experimental psychology, Storr reveals how the stories we tell ourselves about the world invisibly shape our beliefs, and how the neurological “hero maker” inside us all can so easily lead to self-deception, toxic partisanship and science denial.

Will Storr is an award-winning journalist and novelist whose work has appeared in the Guardian, Sunday Times, The New Yorker, and the New York Times. His books include Selfie: How the West Became Self-Obsessed and The Unpersuadables: Adventures with the Enemies of Science (Overlook/Abrams Press). His writing courses are among the most in-demand offerings of the Guardian Masterclasses and the Faber Academy. He lives in Kent, England.
Loading...
or support indie stores by buying on
(This book is on backorder)