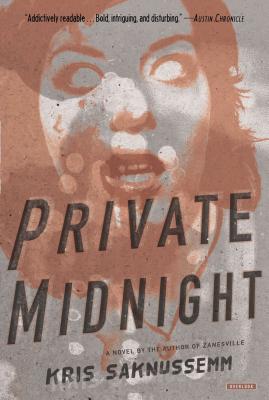 By the author of Zanesville, a seductive story of grit, gunplay, vampirism, and a bit of bondage. Detective Birch Ritter is a man on the edge-of himself. His past is filled with secrets, shadows, guilt, and ghosts. Then a dubious police buddy he hasn't seen in a year introduces him to a mysterious woman who says her business is shadows. What she knows about what lies between the darkness and the light inside men is more than Ritter may want to find out, and much more than he can resist learning. It's said that to try to forget is to try to conceal, and concealing evidence is a crime. But maybe revelation is another kind of crime-against nature. Kris Saknussemm, the widely acclaimed author of the sci-fi smash Zanesville,, now delves into another genre, and another world-a world where even the sunlight is shadowy and where deviancy is the norm. Private Midnight is a journey into the seedy, sexy, underbelly of life-crime noir for a new generation.

Kris Saknussemm is a writer, painter, and sculptor. The author of the novel Zanesville,  he has been a resident at the MacDowell Colony and is a member of the Science Fiction and Fantasy Writers of America. He divides his time between a rural property outside Melbourne and the West Coast of America.
Loading...
or
Not Currently Available for Direct Purchase