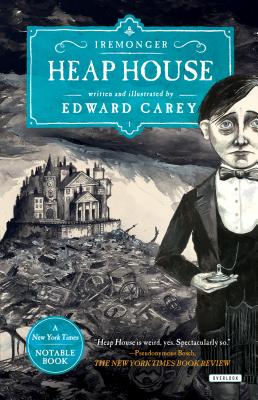 A 2014 New York Times Notable Book!A Kirkus Best Teen Book of 2014A New York Times Book Review Editor’s Pick!A Publishers Weekly Indie Pick: Big Books from Small Presses!Welcome to Heap House, the sprawling, slipshod maze of a mansion, built on the “Heaps,” a collection of forgotten trash and curios. Young Clod Iremonger and his eccentric family, the “kings of mildew, moguls of mold,” made their fortune from this collected detritus. The Iremongers are an odd old family, each the owner of the birth object they must keep with them at all times. Clod is perhaps the oddest of all—his gift and his curse is that he can hear all of the objects of Heap House whispering.  Yes, a storm is brewing over Heap House and the house’s many objects are showing strange signs of life. Clod is on the cusp of being “trousered” and married off (unhappily) to his cousin Pinalippy when he meets the plucky orphan servant Lucy Pennant, with whose help he begins to uncover the dark secrets of his family’s empire.  The first installment of the Iremonger Trilogy, Heap House introduces readers to a gloriously imagined dark world whose inhabitants come alive on the page—and in Edward Carey’s fantastical illustrations. Heap House is a book that will appeal to fans of Neil Gaiman, Roald Dahl and Mervyn Peake, young and old alike. Mystery, romance, and the perils of the Heaps await!

Edward Carey is the author and illustrator of two novels for adults, Observatory Mansions and Alva and Irva, which was longlisted for the IMPAC Literary Award. The Iremonger Trilogy is his first work for young readers. Born in England, he now lives with his wife, Elizabeth McCracken, and their two children in Austin, Texas, where he wrote the Iremonger Trilogy.
Loading...
or
Not Currently Available for Direct Purchase