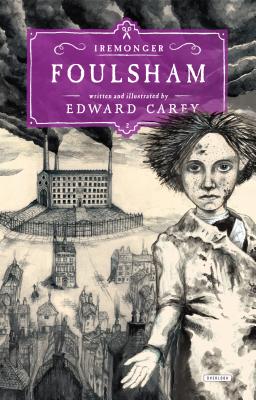 At the Iremonger family offices in the aptly named borough of Foulsham, London's great repository of filth, Grandfather Umbitt Iremonger has found a way to make objects assume the shapes of people, and how to turn people into objects. Clod, whom he sees as a threat, has been turned into a gold coin and is being passed as currency from hand-to-hand through the town. Meanwhile, Lucy Pennant has been discarded as a clay button, abandoned in the depths of the Heaps. Will they be found and returned to human form? Enter Binadit and Rippit...Meanwhile Umbitt builds an army of animated objects to retrieve the missing gold coin. All around the city, thing—ordinary things—are twitching into life, and the reader is held in breathless suspense as questions of life and death, value and disposability, rumble through this dark and mesmerizing world.

Edward Carey is the author and illustrator of two novels for adults, Observatory Mansions and Alva and Irva, which was longlisted for the IMPAC Literary Award. The Iremonger Trilogy is his first work for young readers. Born in England, he now lives with his wife, Elizabeth McCracken, and their two children in Austin, Texas, where he wrote the Iremonger Trilogy.
Loading...
or
Not Currently Available for Direct Purchase