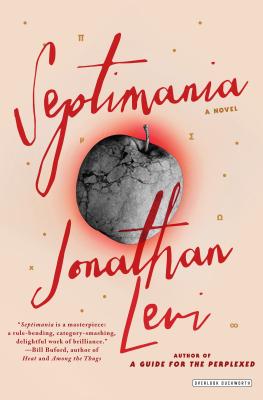 On an spring afternoon in 1978 in the loft of a church outside Cambridge, England, an organ tuner named Malory loses his virginity to a dyslexic math genius named Louiza. When Louiza disappears, Malory follows her trail to Rome. There, the quest to find his love gets sidetracked when he discovers he is the heir to the Kingdom of Septimania, given by Charlemagne to the Jews of eighth-century France.  In the midst of a Rome reeling from the kidnappings and bombs of the Red Brigades, Malory is crowned King of the Jews, Holy Roman Emperor and possibly Caliph of All Islam. Over the next fifty years, Malory’s search for Louiza leads to encounters with Pope John Paul II, a band of lost Romanians, a magical Bernini statue, Haroun al Rashid of Arabian Nights fame, an elephant that changes color, a shadowy U.S. spy agency and one of the 9/11 bombers, an appleseed from the original Tree of Knowledge, and the secret history of Isaac Newton and his discovery of a Grand Unified Theory that explains everything. It is the quest of a Candide for love and knowledge, and the ultimate discovery that they may be unified after all.

Jonathan Levi is an American writer and producer. A founding editor of Granta magazine, Levi is author of two novels, A Guide for the Perplexed and Septimania. His short stories and articles have appeared in many publications including Granta, Condé Nast Traveler, GQ, Terra Nova, The Nation, The New York Times, and The Los Angeles Times Book Review, and his plays and opera libretti have been performed all over the world. Born in New York, he currently lives in Rome, Italy.
Loading...
or
Not Currently Available for Direct Purchase