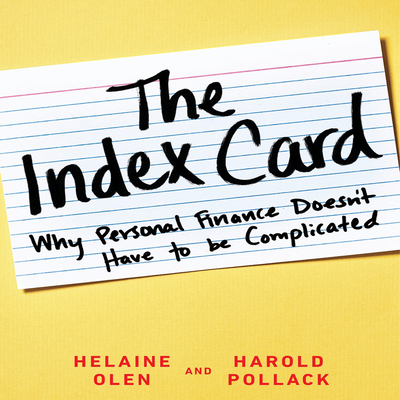 Why Personal Finance Doesn't Have to Be Complicated

When it comes to our money, many of us make the same mistakes over and over again. We are confident when we should panic. We believe that stock we heard about on CNBC or saw promoted on Twitter is the next Apple or Google. Or we find managing our money difficult and boring, and we don't pay any attention at all. We neglect things. We toss our retirement statements in a drawer, planning to look at them on a future day that never arrives. We pay our bills the day before they are due. There is only one thing more confusing: all the you-can-have-it-all financial how-to books out there. Now, Helaine Olen and Harold Pollack draw on years of experience researching and reporting on the financial lives of Americans to present an accessible, one-stop guide to taking back your financial future. The answers are simple enough to fit on an index card-an idea so user-friendly and helpful that Money magazine named it one of their Best New Money Ideas. Their simple rules include:
Beyond outlining the rules, the authors also explain why so few people follow them-because the financial services industry profits when people behave foolishly, and a web of incentives and misinformation lead consumers astray, especially in hard times when people feel the pressure to do almost anything to keep up. Armed with The Index Card, listeners will gain the tools, knowledge, and confidence to make the right decisions regarding their money.

HELAINE OLEN is the author of Pound Foolish, a contributing editor at Pacific Standard magazine, and the personal finance columnist at Inc. magazine. Her work has appeared in numerous publications, including The New York Times, Slate.com, Salon.com, Bloomberg News and the Los Angeles Times, where she wrote the popular "Money Makeover" feature. Business Insider has ranked her as one of the 50 Women Who Are Changing the World and MoneyTips.com recently named her one of the Top 30 Most Influential People in Personal Finance and Wealth. She lives in New York City with her family. HAROLD POLLACK is the Helen Ross Professor of Social Service Administration at the University of Chicago. In addition to his academic work, he writes regularly for The Washington Post, The Nation, The New York Times, New Republic, Politico, and The Atlantic. He lives outside Chicago with his family.
Loading...
or support indie stores by buying on