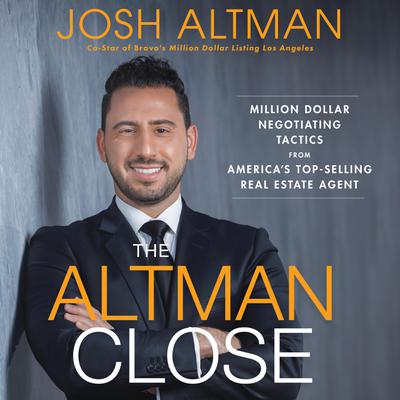 Land the deals you want and develop your instincts with million-dollar negotiation techniques.

After selling over $3 billion in real estate, including the most expensive one-bedroom house in history, Josh Altman, costar of the hit show Million-Dollar Listing Los Angeles, wants to teach you the real estate sales and negotiation tactics that have made him one of America's top agents. Buying or selling a house, whether for a client or yourself, is one of the most important (and most stressful) deals anyone can make, demanding emotional intelligence and a solid set of negotiating skills. But by mastering the same techniques that sell multi-million-dollar homes in Bel Air and Beverly Hills, you can attract buyers and close deals on any property.

Josh breaks down the art of real estate into three simple parts. First, he'll help you get business in the door during the Opening. Then he takes you step-by-step through the Work: everything between the first handshake and the last. And finally, the Close, the last step that ensures all your hard work pays off as you seal the deal.

Austin Rising hails from Albuquerque, New Mexico-where he began acting at the age of four. After high school, he decided to take his passion to the University of Denver, where he studied theater. He then moved to Los Angeles to study at the American Academy of Dramatic Arts and the prestigious South Coast Repertory theater.

In front of the camera, Austin can be seen in Better Call Saul, The Night Shift, In Plain Sight, New York Prison Break: The Seduction of Joyce Mitchell, Longmire, Hostiles, and The Ballad of Buster Scruggs.

Behind the microphone, Austin has been narrating since 2015, amassing many critically acclaimed titles under his belt, such as the Last War series by Peter Bostrom, the Overworld Chronicles by John Corwin, and Models by Mark Manson. Being a gifted mimic since a very young age, Austin loves to perform young adult, science fiction, fantasy, and LitRPG titles which lend themselves to dynamic characterizations.