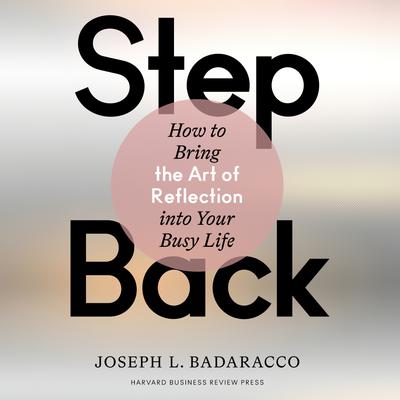 How to Bring the Art of Reflection into Your Busy Life

Four simple rules for using reflection to find clarity despite the turbulence of work and life.

We all wish we had more time to pause and reflect about small decisions and big goals—and everything in between. But since we live and work in a vortex of tasks, meetings, decisions, and serious responsibilities, we rarely get the chance to step back.

In this practical guide, bestselling author and Harvard Business School professor Joseph Badaracco argues that you don't need long periods of solitude and tranquility to reflect well. In fact, reflection can take place in the cracks and crevices of your very busy life, and these moments can help you understand your feelings, look at problems from different perspectives, focus on what really matters, and, ultimately, lead a better life.

Building on candid interviews with over a hundred executives and professionals, as well as classic works by Marcus Aurelius, Michel de Montaigne, and Ignatius Loyola, Badaracco offers four rules for reflection that you can customize to the demands of your work and your goals for your life.

Concise, smart, and pragmatic, Step Back is the guide you need to make reflection a positive force in your work and life.

Daniel Henning is a director, producer, actor, and writer. His work has been seen on HBO, CBS, NBC, ABC, FOX, MTV, Comedy Central, and on stages throughout Southern California. He won a 2017 Telly Award for "Best Writer" for the film version of his play The Tragedy of JFK (as Told by Wm. Shakespeare). As director and writer, his TV and film work includes MTV's Rob Dyrdek's Fantasy Factory and the film Critic's Choice. He won the NAACP Theatre Award for "Best Director of a Musical" for The Wild Party.

He is the Founding Artistic Director of Hollywood's The Blank Theatre, winning over 200 awards for his productions, including "Best Production," from LA Drama Critic Circle, LA Weekly, Ovations, NAACP, etc. Henning has been inspirational to thousands of young artists through his creation of The Blank's Young Playwrights Festival (the only professional nationwide competition for playwrights aged nine to nineteen). He directed the first play by 2016 Tony Award Winner for "Best Play" Stephen Karam when Stephen was seventeen and a winner in The Blank's Young Playwrights Festival.

Henning has also been an acting teacher and coach and is known for his ability to spot young talent. He has given opportunities to many young actors who later went on to success in Hollywood including Tessa Thompson, Noah Wyle, Alison Brie, Molly Shannon, Academy Award winner Octavia Spencer, and Sarah Michelle Gellar. He coached Sarah Michelle Gellar on her auditions for the landmark TV series Buffy the Vampire Slayer, and they shared a close personal friendship, even traveling to Australia together with family for New Year's Eve 2000, where the paparazzi photographed Henning and Gellar dancing. For several months, Henning was rumored to be dating Gellar in the Australian fan magazines (including Big Hit Magazine), which, of course, was inaccurate as Henning was traveling with his husband, Rick Baumgartner.
He is a graduate of NYU's Tisch School of the Arts, Circle in the Square Theatre School, and American Conservatory Theatre. His work for LGBTQ Equality includes creating the fiftieth Anniversary Celebration of the Black Cat Protests (the first major LGBTQ Demonstration in the US) and directing and hosting the 2017 LA City Council LGBTQ Pride Ceremony. He was recently honored by the CA State Legislature for his work in LGBTQ Equality and nurturing the future of the Arts.

He has also narrated dozens of audiobooks, both nonfiction and fiction.