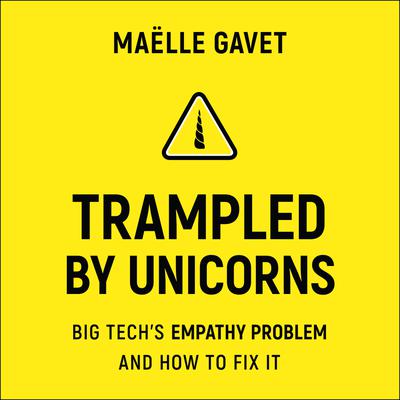 Big Tech's Empathy Problem and How to Fix It

Trampled by Unicorns: Big Tech's Empathy Problem and How to Fix It explores how technology has progressed humanity's most noble pursuits, while also grappling with the origins of the industry's destructive empathy deficit and the practical measures Big Tech can take to self-regulate and make it right again. Author Maëlle Gavet examines the tendency for many of Big Tech's stars to stray from their user-first ideals and make products that actually profoundly damage their customers and ultimately society.

Offering an account of the world of tech startups in the United States and Europe, Trampled by Unicorns argues that the causes and consequences of Big Tech's failures originate from four main sources: the Valley's cultural insularity, the hyper-growth business model, the sector's stunning lack of diversity, and a dangerous self-sustaining ecosystem. However, the book is not just an account of how an industry came off the rails, but also a passionate call to action on how to get it back on track.

Gavet formulates a clear call to action for industry leaders, board members, employees, and consumers/users to drive the change necessary to create better, more sustainable businesses—and the steps Western governments are likely to take should tech leaders fail to do so.

Megan Tusing is an actor and audiobook narrator based in New York City. She developed a love of storytelling and a passion for language at a young age when first introduced to William Shakespeare, which eventually led her to pursue a career in acting. She has appeared on stage, in films, and on such television programs as Law & Order: SVU, Law & Order: CI, Blue Bloods, and Person of Interest. She holds a BA in theater from James Madison University and is a proud member of SAG-AFTRA.