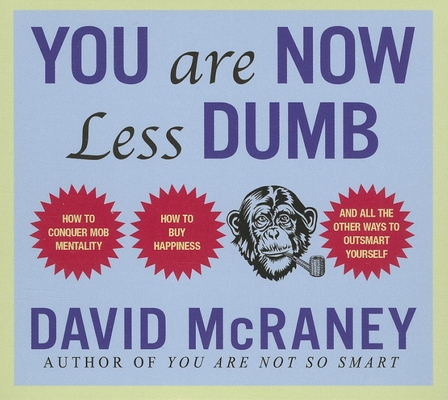 David McRaney's first book, You Are Not So Smart, evolves from his wildly popular blog of the same name. A mix of popular psychology and trivia, McRaney's insights have struck a chord with thousands, and his blog-and now podcasts and videos-have become an internet phenomenon.
Like You Are Not So Smart, YOU ARE NOW LESS DUMB is grounded in the idea that we all believe ourselves to be objective observers of reality-except we're not. But that's okay, because our delusions keep us sane.
Expanding on this premise, McRaney provides eye-opening analyses of fifteen more ways we fool ourselves every day, including: McRaney also reveals the true price of happiness, why Benjamin Franklin was such a badass, and how to avoid falling for our own lies. This smart and highly entertaining audiobook will be wowing listeners for years to come.

David McRaney is a journalist who loves psychology, technology and the internet. Before going to college, he tried waiting tables, working construction, selling leather coats, building and installing electrical control panels, and owning pet stores. As a journalist, McRaney cut his teeth covering Hurricane Katrina on the Gulf Coast and in the Pine Belt for several newspapers. Since then he has been a beat reporter, an editor, a photographer and everything in between.He is now employed as director of new media for a broadcast television company where he also produced a television show focusing on the music of the Deep South.He is married to Amanda McRaney and they live in Hattiesburg, Mississippi.
or support indie stores by buying on