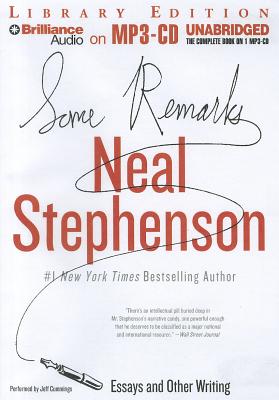 One of the most talented and creative authors working today, Neal Stephenson is renowned for his exceptional novels works colossal in vision and mind-boggling in complexity. Exploring and blending a diversity of topics, including technology, economics, history, science, pop culture, and philosophy, his books are the products of a keen and adventurous intellect. Not surprisingly, Stephenson is regularly asked to contribute articles, lectures, and essays to numerous outlets, from major newspapers and cutting-edge magazines to college symposia. This remarkable collection brings together previously published short writings, both fiction and nonfiction, as well as a new essay (and an extremely short story) created specifically for this volume. Stephenson ponders a wealth of subjects, from movies and politics to David Foster Wallace and the Midwestern American College Town; video games to classics-based sci-fi; how geekdom has become cool and how science fiction has become mainstream (whether people admit it or not); the future of publishing and the origins of his novels. Playful and provocative, Some Remarks displays Stephenson's opinions and ideas on: The Internet, our dwindling national attention span, and the cultural importance of books and bookishness Waco, religion, and the cluelessness of secular society Metaphysics and the battle between Isaac Newton and Gottfried Wilhelm Leibniz The laying of the longest wire on Earth and why it matters to you Technology, freedom, commerce, and the Chinese How Star Wars and 300 mirror who we are today and what that spells for our future Modern Jedi knights, a.k.a. scientists and echnologists, and why they are admired and feared by both the left and the right By turns amusing and profound, critical and celebratory, yet always entertaining, Some Remarks offers a fascinating look into the prismatic mind of this extraordinary writer.