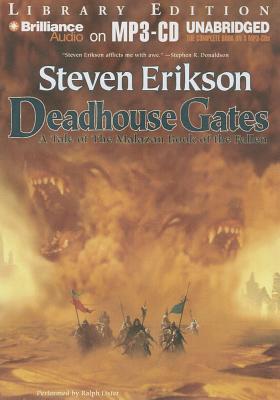 In the vast dominion of Seven Cities, in the Holy Desert Raraku, the seer Sha ik and her followers prepare for the long-prophesied uprising known as the Whirlwind. Unprecedented in size and savagery, this maelstrom of fanaticism and bloodlust will embroil the Malazan Empire in one of the bloodiest conflicts it has ever known, shaping destinies and giving birth to legends.... Set in a brilliantly realized world ravaged by dark, uncontrollable magic, this thrilling novel of war, intrigue, and betrayal confirms Steven Erikson as a storyteller of breathtaking skill, imagination, and originality a new master of epic fantasy. Give me the evocation of a rich, complex, and yet ultimately unknowable other world, with a compelling suggestion of intricate history and mythology and lore. Give me mystery amid the grand narrative. Give me a world in which every sea hides a crumbled Atlantis, every ruin has a tale to tell, every mattock blade is a silent legacy of struggles unknown. Give me, in other words, the fantasy work of Steven Erikson. Andrew Leonard, Salon.