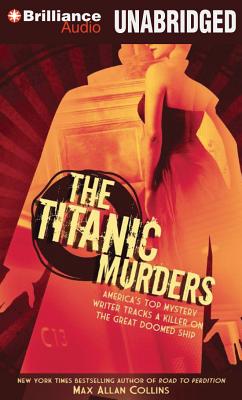 When a passenger is found dead inside a locked cabin aboard the opulent Titanic, it's a crime worthy of "the Thinking Machine," the popular fictional investigator who solves mysteries using formidable logic. So who better to crack this real-life case than author Jacques Futrelle, the man behind America's favorite detective?

On board for a romantic getaway with his wife, Futrelle agrees to conduct a stealth inquiry. The list of suspects on the Titanic's first-class deck is long and includes the brightest lights from high society, each with no shortage of dark secrets. As the mammoth ship speeds across the Atlantic toward its doom, Futrelle races to uncover which passenger has a secret worth killing for--before the murderer strikes again.

Set in the days leading up to the luxury liner's tragic sinking, this historical thriller is a dazzling blend of fact and fiction that will enthrall readers with page-turning revelations and Titanic lore.