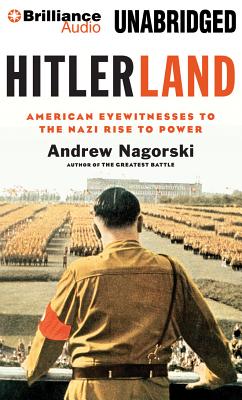 Some of the Americans in Weimar and then Hitler's Germany were merely casual observers, others deliberately blind; a few were Nazi apologists. But most slowly began to understand the horror of what was unfolding, even when they found it difficult to grasp the breadth of the catastrophe. Among the journalists, William Shirer, Edgar Mowrer, and Dorothy Thompson were increasingly alarmed. Consul General George Messersmith stood out among the American diplomats because of his passion and courage. Truman Smith, the first American official to meet Hitler, was an astute political observer and a remarkably resourceful military attach . Historian William Dodd, whom FDR tapped as ambassador in Hitler's Berlin, left disillusioned; his daughter Martha scandalized the embassy with her procession of lovers from her initial infatuation with Nazis she took up with. She ended as a Soviet spy. On the scene were George Kennan, who would become famous as the architect of containment; Richard Helms, who rose to the top of the CIA; Howard K. Smith, who would coanchor the ABC Evening News. The list of prominent visitors included writers Sinclair Lewis and Thomas Wolfe, famed aviator Charles Lindbergh, the great athlete Jesse Owens, newspaper publisher William Randolph Hearst, and black sociologist and historian W.E.B. Dubois. Observing Hitler and his movement up close, the most perceptive of these Americans helped their reluctant countrymen begin to understand the nature of Nazi Germany as it ruthlessly eliminated political opponents, instilled hatred of Jews and anyone deemed a member of an inferior race, and readied its military and its people for a war for global domination. They helped prepare Americans for the years of struggle ahead.