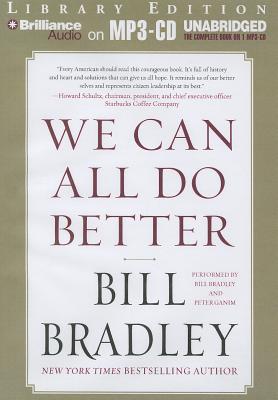 Bill Bradley is arguably one of the most well-versed public figures of our time. The eighteen-year New Jersey Senator, financial and investment adviser, Olympic and NBA athlete, national radio host, and bestselling author has lived in the United States as both political insider and outsider, national sports celebrity and behind-the-scenes confidante, leader and teammate. His varied experiences help to inform his unique and much-sought-after point of view on Washington and the country at large. In We Can All Do Better, for the first time since the financial meltdown and since the worst of the intensifying political gridlock, Bradley offers his own concise, powerful, and highly personal review of the state of the nation. Bradley argues that government is not the problem. He criticizes the role of money in politics, explains how continuing on our existing foreign policy, electoral, and economic paths will mean a diminished future, and lays out exactly what needs to be done to reverse course. Breaking from the intransigent long-held viewpoints of both political parties, and with careful attention to our nation's history, Bradley passionately lays out his narrative. He offers a no-holds-barred prescription on subjects including job creation, deficit reduction, education, and immigration. While equally critical of the approaches of the Tea Party and Occupy Movements, he champions the power of individual Americans to organize, speak out, bridge divisions, and he calls on the media to assume a more responsible role in our national life. As this moving call to arms reminds us, we can all elected officials, private citizens, presidents do a better job of moving our country forward. Bradley is perhaps the best guide imaginable, with his firsthand knowledge of governments inner-workings, the country's diversity, and the untapped potential of the American people.