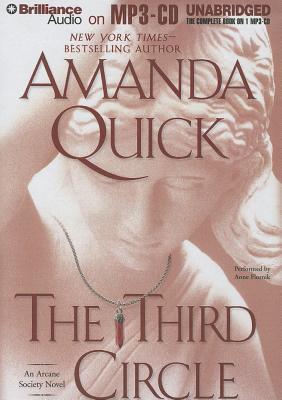 Leona Hewitt, disguised in men's formal evening clothes, has secretly made her way into Lord Delbridge's private museum to recover a relic stolen from her family years ago. But someone else is there in the dimly lit gallery, on the same errand: a tall, black-cloaked man whose very voice is enough to put her in a trance. Thaddeus Ware, a mesmerist with powerful psychic energy, is accustomed to fearful reactions from others - women in particular. After all, a man who can control the minds and actions of others could rob a lady of her virtue - without her ever knowing But Leona shows no trace of hysteria in his presence. A force to be reckoned with as both a gifted crystal worker and a woman, she exerts a rather hypnotic power over the hypnotist himself. And she is determined to keep the crystal they recovered, by giving him the slip at a run-down London inn. Thaddeus, on assignment for the secretive Arcane Society, knows the menace Leona is courting by absconding with the crystal. It is a source of remarkable energy, and it holds the potential for great destruction. Lord Delbridge has already killed two men to acquire it, for it is his key to membership in the elite, shadowy group known as the Third Circle. And with the help of a seductive hunter of preternatural skill, dubbed "The Midnight Monster" by the press, Delbridge intends to find her. With the stolen crystal in their possession, the danger is only beginning.