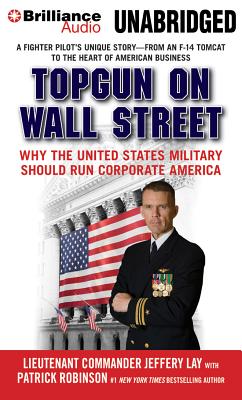 TOPGUN on Wall Street chronicles one man's extraordinary journey from the cornfields of Ohio, to the cockpit of an F-14, to the boardrooms on Wall Street. Lieutenant Commander Jeffery Lay and #1 New York Times bestselling author Patrick Robinson bring a provocative, ground-breaking voice to the business landscape with a revolutionary answer for stabilizing corporate America: business the military way. As a TOPGUN fighter pilot, Lieutenant Commander Lay perfected a tried-and-true military technique: PLAN BRIEF EXECUTE DEBRIEF However, when he retired from active duty in 2006 and went to work for a subsidiary of the ill-fated Lehman Brothers, he noticed that everything about the business world was different: less efficient, awash with excuses for failure, allowance of men with tricky morals to rise to the top, self-gain overshadowing teamwork, and a devastating lack of accountability. With such deeply rooted flaws, is corporate America doomed for perpetual failure? Answer: Not if we put admirals in charge and adopt the military's tight chain of command. This game-changing thesis is interwoven with Lieutenant Commander Lay's dramatic story, including his high-intensity strike fighter aircraft landings, never-before-written details of the United States Navy Fighter Weapons School (TOPGUN), and his heart-breaking, humbling, and inspirational battle with cancer at the peak of his military career. TOPGUN on Wall Street is written by a leader determined to show the business world that excellence is a choice and perfection is attainable.