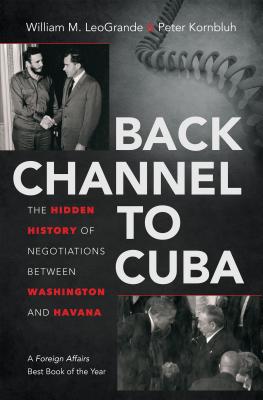 Back Channel to Cuba

The Hidden History of Negotiations Between Washington and Havana

Challenging the conventional wisdom of perpetual hostility between the United States and Cuba--beyond invasions, covert operations, assassination plots using poison pens and exploding seashells, and a grinding economic embargo--this fascinating book chronicles a surprising, untold history of bilateral efforts toward rapprochement and reconciliation. Since 1959, conflict and aggression have dominated the story of U.S.-Cuban relations. Now, LeoGrande and Kornbluh present a new and increasingly more relevant account. From Kennedy's offering of an olive branch to Castro after the missile crisis, to Kissinger's top secret quest for normalization, to Obama's promise of a "new approach," LeoGrande and Kornbluh reveal a fifty-year record of dialogue and negotiations, both open and furtive, indicating a path toward better relations in the future.

William M. LeoGrande, professor of government at American University, is the author of Our Own Backyard: The United States in Central America, 1977-1992, among other books. Peter Kornbluh, director of the Cuba Documentation Project at the National Security Archive in Washington, D.C., is the author of The Pinochet File: A Declassified Dossier on Atrocity and Accountability, among other books.
Loading...
or
Not Currently Available for Direct Purchase