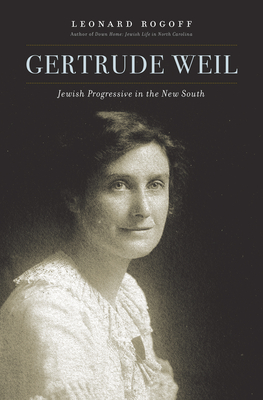 Jewish Progressive in the New South

It is so obvious that to treat people equally is the right thing to do, wrote Gertrude Weil (1879-1971). In the first-ever biography of Weil, Leonard Rogoff tells the story of a modest southern Jewish woman who, while famously private, fought publicly and passionately for the progressive causes of her age. Born to a prominent family in Goldsboro, North Carolina, Weil never married and there remained ensconced--in many ways a proper southern lady--for nearly a century. From her hometown, she fought for women's suffrage, founded her state's League of Women Voters, pushed for labor reform and social welfare, and advocated for world peace.

Weil made national headlines during an election in 1922 when, casting her vote, she spotted and ripped up a stack of illegally marked ballots. She campaigned against lynching, convened a biracial council in her home, and in her eighties desegregated a swimming pool by diving in headfirst. Rogoff also highlights Weil's place in the broader Jewish American experience. Whether attempting to promote the causes of southern Jewry, save her European family members from the Holocaust, or support the creation of a Jewish state, Weil fought for systemic change, all the while insisting that she had not done much beyond the ordinary duty of any citizen.