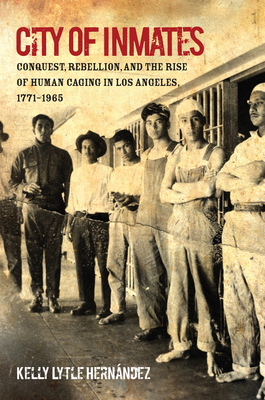 Los Angeles incarcerates more people than any other city in the United States, which imprisons more people than any other nation on Earth. This book explains how the City of Angels became the capital city of the world's leading incarcerator. Marshaling more than two centuries of evidence, historian Kelly Lytle Hernandez unmasks how histories of native elimination, immigrant exclusion, and black disappearance drove the rise of incarceration in Los Angeles. In this telling, which spans from the Spanish colonial era to the outbreak of the 1965 Watts Rebellion, Hernandez documents the persistent historical bond between the racial fantasies of conquest, namely its settler colonial form, and the eliminatory capacities of incarceration.

But City of Inmates is also a chronicle of resilience and rebellion, documenting how targeted peoples and communities have always fought back. They busted out of jail, forced Supreme Court rulings, advanced revolution across bars and borders, and, as in the summer of 1965, set fire to the belly of the city. With these acts those who fought the rise of incarceration in Los Angeles altered the course of history in the city, the borderlands, and beyond. This book recounts how the dynamics of conquest met deep reservoirs of rebellion as Los Angeles became the City of Inmates, the nation's carceral core. It is a story that is far from over.