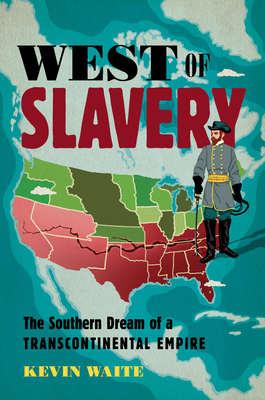 The Southern Dream of a Transcontinental Empire

When American slaveholders looked west in the mid-nineteenth century, they saw an empire unfolding before them. They pursued that vision through diplomacy, migration, and armed conquest. By the late 1850s, slaveholders and their allies had transformed the southwestern quarter of the nation - California, New Mexico, Arizona, and parts of Utah - into a political client of the plantation states. Across this vast swath of the map, white southerners defended the institution of African American chattel slavery as well as systems of Native American bondage. This surprising history uncovers the Old South in unexpected places, far beyond the region's cotton fields and sugar plantations.

Slaveholders' western ambitions culminated in a coast-to-coast crisis of the Union. By 1861, the rebellion in the South inspired a series of separatist movements in the Far West. Even after the collapse of the Confederacy, the threads connecting South and West held, undermining the radical promise of Reconstruction. Kevin Waite brings to light what contemporaries recognized but historians have described only in part: The struggle over slavery played out on a transcontinental stage.