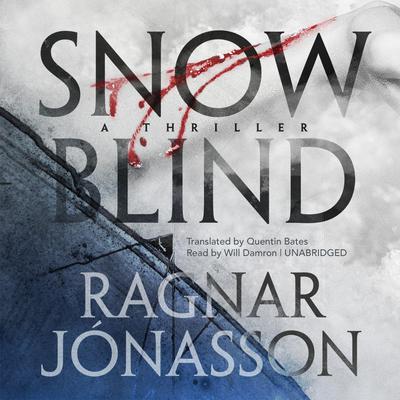 By Ragnar Jónasson, Will Damron (Narrator)

Siglufjördur: an idyllically quiet fishing village in Northern Iceland where no one locks their doors—accessible only via a small mountain tunnel.

Ari Thór Arason: a rookie policeman on his first posting, far from his girlfriend in Reykjavík—with a past that he’s unable to leave behind.

When a young woman is found lying half-naked in the snow, bleeding and unconscious, and a highly esteemed, elderly writer falls to his death in the local theater, Ari is dragged straight into the heart of a community where he can trust no one and secrets and lies are a way of life.

Past plays tag with the present and the claustrophobic tension mounts as Ari is thrust ever deeper into his own darkness—blinded by snow and with a killer on the loose.

Taut and terrifying, Snowblind is a startling debut from an extraordinary new talent.

Ragnar Jónasson was born in Iceland and works as an attorney at law and writer in Reykjavík. Before embarking on a writing career, he translated fourteen Agatha Christie novels into Icelandic. He is the cofounder of the international crime writing festival Iceland Noir and has appeared on panels at various crime fiction festivals, including Bouchercon and Left Coast Crime in the US. Jónasson lives in Reykjavík with his wife and two daughters.