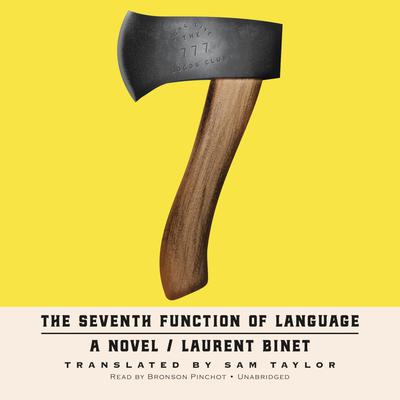 From the prizewinning author of HHhH comes The Seventh Function of Language, a romp through the French intelligentsia of the twentieth century.Paris, 1980. The literary critic Roland Barthes dies-struck by a laundry van-after lunch with the presidential candidate Francois Mitterand. The world of letters mourns a tragic accident. But what if it wasn't an accident at all? What if Barthes was murdered?In The Seventh Function of Language, Laurent Binet spins a madcap secret history of the French intelligentsia, starring such luminaries as Jacques Derrida, Umberto Eco, Gilles Deleuze, Michel Foucault, and Julia Kristeva-as well as the hapless police detective Jacques Bayard, whose new case will plunge him into the depths of literary theory. Soon Bayard finds himself in search of a lost manuscript by the linguist Roman Jakobson on the mysterious "seventh function of language."A brilliantly erudite comedy that recalls Flaubert's Parrot and The Name of the Rose-with more than a dash of The Da Vinci Code-The Seventh Function of Language takes us from the cafes of Paris to the corridors of Cornell University and into the duels and orgies of the Logos Club, a secret philosophical society that dates to the era of the Roman Empire. Binet has written both a send-up and a wildly exuberant celebration of the French intellectual tradition.

Laurent Binet was born in Paris, France, in 1972. He is the author the debut novel HHhH, which won the Prix Goncourt du Premier Roman and was named one of the fifty best books of 2015 by the New York Times. His memoir, La Vie professionnelle de Laurent B., tells of his experience teaching in secondary schools in Paris. He is a professor at the University of Paris III, where he lectures on French literature.