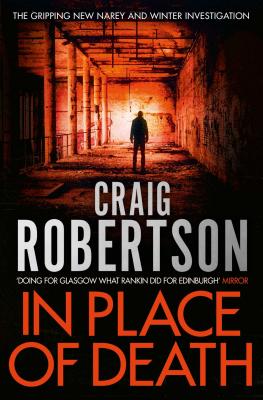 In Place of Death (Paperback)

The fifth chilling and atmospheric thriller in the Tony Winter series from the Sunday Times bestselling author of Cold Grave--perfect for fans of Stuart MacBride and Jo Nesbo. A young man enters the culverted remains of an ancient Glasgow stream, looking for thrills. Deep below the city, the odor of decay permeates the air and the darkness becomes more claustrophobic with every step. As the ceiling lowers to no more than a couple of feet above the ground, the man finds his path blocked by another person. Someone with his throat cut. As DS Rachel Narey leads the official murder investigation, photographer Tony Winter follows a lead of his own, through the shadowy world of urban explorers, people who pursue a dangerous and illegal hobby, a world that Winter knows more about than he lets on. And it soon becomes clear that the murderer has killed before, and has no qualms about doing so again.

During his 20-year career with a Scottish Sunday newspaper, Craig Robertson interviewed three recent Prime Ministers; attended major stories including 9/11, Dunblane, the Omagh bombing and the disappearance of Madeleine McCann; beenwas pilloried on breakfast television, beat Oprah Winfrey to a major scoop, spent time on Death Row in the USA and dispensed polio drops in the backstreets of India. His debut novel, RANDOM, was shortlisted for the CWA New Blood Dagger and was a Sunday Times bestseller
or
Not Currently Available for Direct Purchase
Copyright © 2020 American Booksellers Association