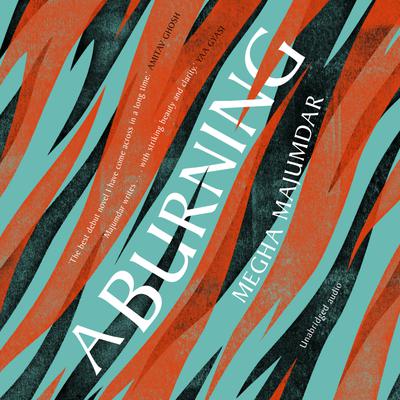 The most electrifying debut of 2021

“Majumdar’s suspenseful narrative holds a mirror up to society at large, reflecting the lies people tell themselves to rationalize sacrificing morality for personal gain. Unintended consequences from an impulsive social media post explode against a backdrop of deep economic insecurities and centuries-old prejudices. A searing debut, this novel is timely and timeless. It packs a punch way above its weight. Brilliant.”
— Lisa Johnson, Penguin Bookshop, Sewickley, PA
View the List

'Immaculately constructed, acidly observed and gripping from start to finish, A Burning is a brilliant debut.' The Guardian
'A big hit in America last year, this buzzy debut about the impact of a terrorist attack in a Kolkata slum on three connected characters is full of hot-button global topics, including violent nationalism'  Metro

‘Powerful. […] Majumdar’s page-turning thriller seeks to open our eyes to the role of persecution in populist politics’ – Mail on Sunday

'A brilliant character study about politics and power, this assured debut moves at a thriller's pace but with a meticulous eye for detail.' Nikesh Shukla

'A Burning is a political thriller so charged and tense, it will keep you reading after lights out.' Red Magazine

A girl walks through the slums of Kolkata holding an armful of books. She returns home smelling of smoke, and checks her most prized possession: a brand-new smartphone, purchased in instalments. On Facebook, there is only one conversation.

On the small, glowing screen, she types a dangerous thing…

‘If the police didn’t help ordinary people like you and me, if the police watched them die, doesn’t that mean that the government is also a terrorist?’

Set in contemporary India, A Burning is the story of three unforgettable characters, all dreaming of a better future, whose lives are changed for ever when they become caught up in the devastating aftermath of a terrorist attack.

Jivan – a poor, young, Muslim girl, who dreams of going to college – faces a possible death sentence after being accused of collaborating with the terrorists.
Lovely – an exuberant hijra who longs to be a Bollywood star – holds the alibi that can set Jivan free, but telling the truth will cost her everything she holds dear.
PT Sir – an opportunistic gym teacher who once taught Jivan – becomes involved with Hindu nationalist politics and his own ascent is soon inextricably linked to Jivan’s fall.

Taut, propulsive and electrifying, from its opening lines to its astonishing finale, A Burning confronts issues of class, fate, prejudice and corruption with a Dickensian sense of injustice, and asks us to consider what it means to nurture big ambitions in a country hurtling towards political extremism.

A Burning is a novel for our times and for all time.
Loading...