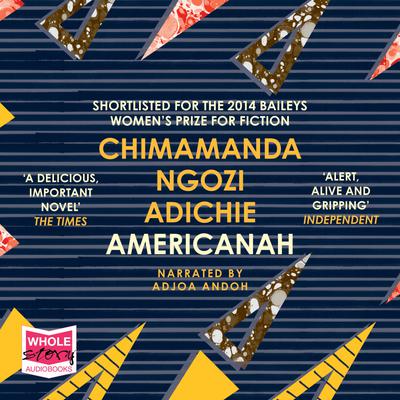 SHORTLISTED FOR THE BAILEY S WOMEN S PRIZE FOR FICTION 2014.

From the award-winning author of Half of a Yellow Sun, a powerful story of love, race and identity.

As teenagers in Lagos, Ifemelu and Obinze fall in love. Their Nigeria is under military dictatorship, and people are fleeing the country if they can. The self-assured Ifemelu departs for America. There she suffers defeats and triumphs, finds and loses relationships, all the while feeling the weight of something she never thought of back home: race. Obinze had hoped to join her, but post-9/11 America will not let him in, and he plunges into a dangerous, undocumented life in London. Thirteen years later, Obinze is a wealthy man in a newly democratic Nigeria, while Ifemelu has achieved success as a blogger. But after so long apart and so many changes, will they find the courage to meet again, face to face?

“Actress Adjoa Andoh brings to life Adichie’s complex, beautifully wrought novel – which is both a love story and a nuanced analysis of political topics including systemic racism in America; immigration in the UK; and the class system in Nigeria.” VOGUE

“One of the previous decade’s landmark novels… Andoh is a skilled, exciting narrator.” THE TIMES