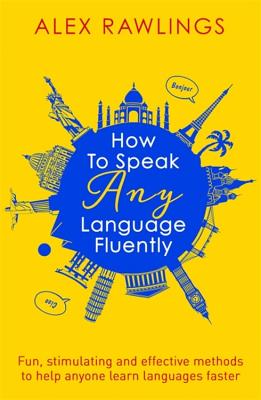 How to Speak Any Language Fluently

This book will give you the skills to learn to speak any language with confidence. It uses techniques that can easily be incorporated into your daily life, while making use of whatever resources you have available.

Whether you are starting out with your first foreign language or wishing to add to your repetoire, you'll find a wealth of easy-to-follow advice and achievable goals. Discover how to:

-Speak with greater confidence and accuracy
-Effectively learn vocabulary and grammar
-Use time on the internet and social media to learn a language
-Read real books, websites and articles in a foreign language
-Pass exams that certify your language skills


Praise For How to Speak Any Language Fluently: Fun, stimulating and effective methods to help anyone learn languages faster…

Alex Rawlings' How to Speak Any Language Fluently reveals effective methods to help you learn a foreign language quickly, whatever your level of French—Living France

Alex Rawlings has been fascinated by languages and determined to learn as many as possible for as long as he can remember. He was born and raised in London, where he spoke English and Greek at home, studied German, French and Spanish at school, picked up Dutch, Afrikaans, Hebrew, Italian and Catalan on the side, then studied Russian and German at Oxford University, where he was named Britain's Most Multilingual Student in 2012 after being tested for fluency in all those languages in a competition run by Harper Collins. Since then he has studied many more, including tricky ones like Hungarian and Serbian, and has lived in five different countries, teaching languages, coaching learners, and organising conferences and workshops around the world for language enthusiasts. Alex's writes his practical advice and detailed observations on language learning on his popular blog RawLangs.com, and has also contributed to online and offline publications by the British Council, the European Commission, the Guardian, the Evening Standard, and to the blogs of several language learning companies. This book was conceived in Russia, planned in Hungary, written in Spain, and published in London. Alex travels the world speaking and learning new languages with his Hungarian dachshund, Zoltán.