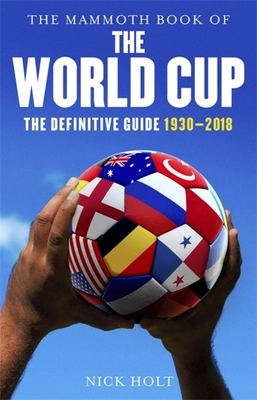 The Mammoth Book of The World Cup

An all-encompassing, chronological guide to football's World Cup, one of the world's few truly international events, in good time for the June 2018 kick-off in Russia. From its beginnings in 1930 to the modern all-singing, all-dancing self-styled 'greatest show on Earth', every tournament is covered with features on major stars and great games, as well as stories about some less celebrated names and quirky stats and intriguing essays.

Holt's focus is very much on what takes place on the field, rather than how football is a mirror for economic corruption, or how a nation's style of play represents a profound statement about its people, or how a passion for football can lift underpaid, socially marginalised people out of poverty.

From the best World Cups, in 1958 and 1970, to the worst, in 1962 and 2010, he looks behind the facts and the technical observations to the stories: the mysterious sins of omission; critical injuries to key players; and coaching U-turns.

He explains how England's World Cup achievements under Sven-Göran Eriksson, far from being a national disgrace, were actually quite impressive, and looks at why Alf Ramsey didn't take Bobby Charlton off in 1970, but this is no parochial, jingoistic account.

The book also asks why Brazil did not contribute in 1966, despite having won the previous two tournaments and going on to win the next one? Why the greatest players of their day did not always shine at the World Cup - George Best and Alfredo Di Stefano, for example, never even made it to the Finals. Why did Johann Cruyff not go to the 1978 World Cup? And why did one of Germany's greatest players never play in the World Cup?

There are lots of tables, some filled with obvious, but necessary information, but others with more quirky observations. Alongside accounts of epic games, there are also brief biographies of all the great heroes of the World Cup.

NICK HOLT has over 20 books in print. He is the author, with Guy Lloyd of Football: The Beautiful Game(2003), which has sold over 100,000 copies across all editions, including Dutch, Italian, French and Portuguese. More recently he wrote The Mammoth Book of the World Cup (2014 - 8,786 copies sold), covering every World Cup from 1930 to 2014. He has written numerous quiz books including Quiz Master, for Harper Collins, which has sold over 35,000 copies, and The Mammoth Quiz Book.
Loading...
or
Not Currently Available for Direct Purchase