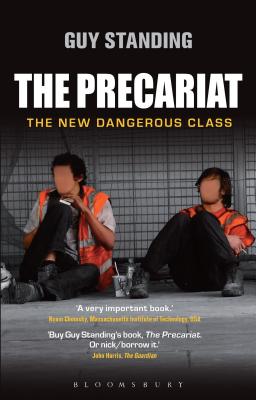 Described by Noam Chomsky as 'a very important book', Guy Standing's "The Precariat "has achieved cult status as the first account of this emerging class of people, facing lives of insecurity, moving in and out of jobs that give little meaning to their lives.

Guy Standing warns that the rapid growth of the precariat is producing instabilities in society. It is a dangerous class because it is internally divided, leading to the villainisation of migrants and other vulnerable groups. And, lacking agency, its members may be susceptible to the siren calls of political extremism. He argues for a new politics, in which redistribution and income security are reconfigured and in which the fears and aspirations of the precariat are made central to a progressive strategy.

Since first publication of this book in 2011, the precariat has become an ever more significant global phenomenon, highly visible in the Occupy movement and in protest movements around the world.
In a new preface Guy Standing discusses such developments - are they indicative of the emergence of a new collective spirit, or do they simply reveal the growing size and growing anger of this new class?

Guy Standing is Professor of Development Studies at the School of Oriental and African Studies (SOAS), University of London, UK. He has previously been Professor of Economic Security at the University of Bath, UK, Professor of Labour Economics at Monash University, Australia and Director of the Socio-Economic Security Programme of the International Labour Organization. He is co-president of the Basic Income Earth Network. His recent books include Work after Globalization: Building Occupational Citizenship (2009) and Beyond the New Paternalism: Basic Security as Equality (2002).
Loading...
or
Not Currently Available for Direct Purchase