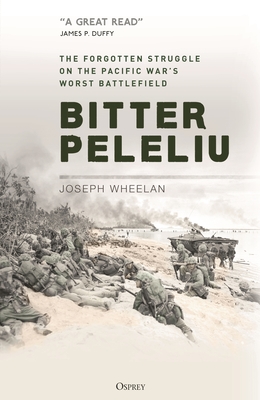 The Forgotten Struggle on the Pacific War's Worst Battlefield

The hard-hitting history of the Pacific War's 'forgotten battle' of Peleliu – a story of intelligence failings and impossible bravery.

In late 1944, as a precursor to the invasion of the Philippines, U.S. military analysts decided to seize the small island of Peleliu to ensure that the Japanese airfield there could not threaten the invasion forces. This important new book explores the dramatic story of this 'forgotten' battle and the campaign's strategic failings. Bitter Peleliu reveals how U.S. intelligence officers failed to detect the complex network of caves, tunnels, and pillboxes hidden inside the island's coral ridges. More importantly, they did not discern – nor could they before it happened – that the defense of Peleliu would represent a tectonic shift in Japanese strategy. No more contested enemy landings at the water's edge, no more wild banzai attacks. Now, invaders would be raked on the beaches by mortar and artillery fire. Then, as the enemy penetrated deeper into the Japanese defensive systems, he would find himself on ground carefully prepared for the purpose of killing as many Americans as possible.

For the battle-hardened 1st Marine Division Peleliu was a hornets' nest like no other. Yet thanks to pre-invasion over-confidence on the part of commanders, 30 of the 36 news correspondents accredited for the campaign had left prior to D-Day. Bitter Peleliu reveals the full horror of this 74-day battle, a battle that thanks to the reduced media presence has never garnered the type of attention it deserves.

Pacific War historian Joseph Wheelan dissects the American intelligence and strategic failings, analyses the shift in Japanese tactics, and recreates the Marines' horrific experiences on the worst of the Pacific battlegrounds. This book is a brilliant, compelling read on a forgotten battle.


Praise For Bitter Peleliu: The Forgotten Struggle on the Pacific War's Worst Battlefield…

“The months-long struggle for Peleliu was one of the hardest fought campaigns of the Pacific War. It should be better known and now, thanks to Joseph Wheelan's exhaustively researched and beautifully and sensitively crafted study, it will take its rightful place alongside the iconic battles of Tarawa, Saipan, Iwo Jima and Okinawa.” —Saul David, author of 'Crucible of Hell'

“Using his signature deep research and powerful narrative, Joseph Wheelan tells us the story of this too often overlooked campaign through the actions of the men on both sides that fought on this island and the commanders who led them… A great read for anyone interested in the Pacific War or in general military history.” —James P. Duffy, author of 'Return to Victory' and 'War at The End of The World'

Joseph Wheelan is the author of ten books about 19th- and 20th-century American history including Midnight in the Pacific (2017) and Bloody Okinawa (2020). Previously, he was an editor and reporter for The Associated Press for 24 years. He lives in Cary, North Carolina.
Loading...
or support indie stores by buying on